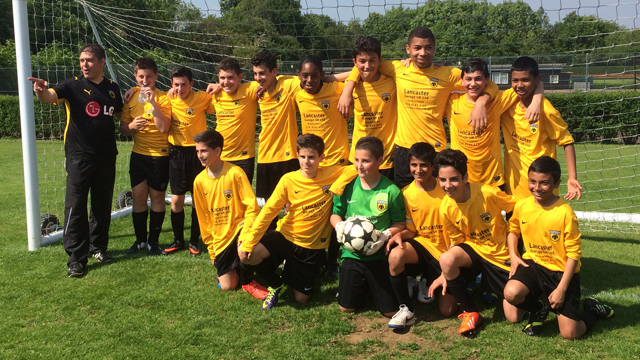 On Sunday 18th May both AEK U13s teams – Black & Golds, had to win their last league game of the season to come top of their divisions. The U13s Gold Team coached by Cos Avraam beat Brady Maccabi 8-1 to win the U13s Green Division which was a magnificent achievement. The club would like to dedicate their league title win to Pany Nicola, who sadly passed away in October 2013 & was also the club secretary. Pany’s two sons Michael and Mario play for the Gold Team and the win yesterday was an extremely emotional occasion for everyone involved. Pany would have been so very proud of his two boys and the teams achievement. The U13s Black team coached by Marino Charalambous secured the Top (Red) division league title with a double header win vs St Albans who would have won the league if they won these two games. AEK won both games meaning they won the title by a massive 11 points, conceding only 15 goals in 22 matches and scoring 83 goals! The U13s are now ‘treble’ winners this season having also won the U13s League Cup, AFA Cup along with the league title. Congratulations & well done to both teams and also their U15s & U11s who have been fantastic both on and off the pitch this season.